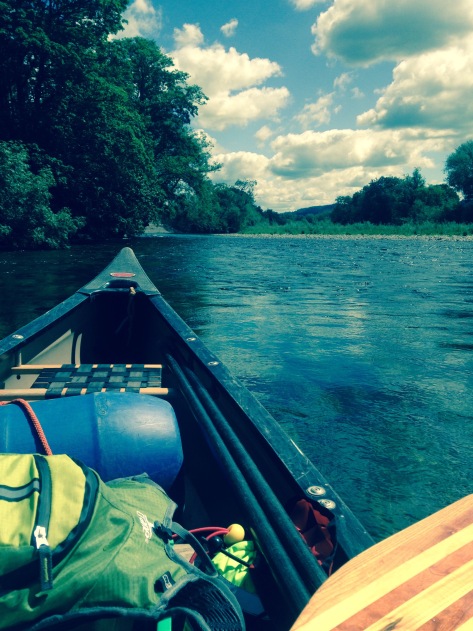 Being the coach of a group of young people on their Duke Of Edinburghs Award Gold expedition taking canoes down the River Wye made me feel young again. ” How long have you been canoeing for Craig?” Was a question mid- morning. “50 years” was the answer with a proud tone to the ever expanding chest beneath the buoyancy aid.  ” You should be well tired by now! ” came the smug reply as the they paddled away creating a wake in their zig zag course.

The reason for Outward Bound being established after the war was that it was noticed that older more established men, hardened to the ways of the world, were lasting longer than the youngsters set adrift in the freezing Atlantic. I was trying hard to summon all my white Wooley jumper naval heritage, which there was none, to give me strength to surf the wave of the speeding canoe.

However, within a short distance my wooden singing paddle was stroking through the clear waters of the Wye on a straight course to proving that Kurt Hahn definitely made the right decision and that there was still a need for getting young people out into the wilds.

They were doing well with coping with their newly aquired skills and were guiding their craft along the winding meanders of the river. As sand martins flew overhead catching flies and diving into the small, holes in the sandy river cliffs they were ignored by the five canoes dancing their way down the river. Not appreciating that these small birds had travelled from Africa to show us their grace and beauty and dynamic flying ability.

The aluminium canoes were not conducive to getting close to the environment they were passing through, not the way they were being paddled anyway. As our national bird of Wales, the Red Kite gave the group the royal fly-past we crashed our way down mile after mile. I was wondering if the days toil would give the time to focus the mind and bring into play the inherent natural curiosity and nature literacy which we possess but not always switch on.

Being in tune with the nature around us means access and exposure to multiple lengthy periods of Vitamin N, a process that will re-balance and give that essential needed well-being feeling. Walking through or paddling through as we were, is not enough to acquire Natural Equilibrium without having the knowledge and appreciation of the wonders that were everywhere around. Hearing and not listening, seeing and not looking, touching and not feeling, doing and not appreciation, are all skills that educators in Nature and the Outdoors have said since the dawn of Outdoor Education, that young people are lacking and need to be taught.

But at what stage do we do the teaching? Most organised trips into the outdoors or into nature are beginning to be the ‘first experience’ that young people get. No longer are there great adventures in the back garden or in the woods over the road, no lengthy expeditions down the lane exploring hedgerows or delights of ruined waste grounds. So how much do we put in, how far do we push without it feeling like school? Well for one, it is education, but it’s a different sized classroom. 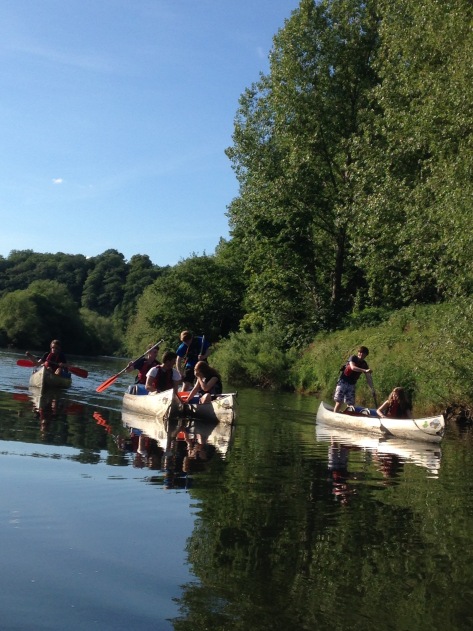 Today’s paddle gave me a different feeling towards our group. The day was always labelled as the longest day, 28 miles, the challenge was set. But not all challenges can be presented as a choice, life doesn’t work that way and so shouldn’t challenges. Accepting is more that a long way to achieving the outcomes of most challenges set. Maybe more skills need to be learnt or knowledge increased in order to achieve success, but there is something that most of us recognise within working in the Outdoors cannot be taught and that is, pure grit. It was this that Kurt Hahn had sought to draw out in ‘character building’ as a process at Outward Bound Schools around the world. The growth of Outdoor Education centres and many outdoor based management training programmes had also tried to emulate and train in.

Today I witnessed some grit within our young teenagers, as the last 4 miles against a head wind after 9 hours on the water, individuals had to dig in to finish. Adversity brings out that inherent part of our survival gene and allows us to access parts of our body that would not normally work to the extent of being useful. “When the going gets tough, the tough get going” and certainly all had dug deep for that extra use of muscle groups that were previously unknown, the dawn of self – awareness that enables you to push on instead of giving up.

Today’s nature table had a great variety of participants, some noticed, some highlighted and some missed because there was no one there to flick the switch on. ” loads of swans all,over the place” but not just loads, 58 in fact all within the size of half a football pitch. I’d never seen as many in one small place, so to me it was wonderful to others they were just in the way! A small lump on a log was highlighted, ” well, so what ! ” Then once explained it became a Wow! moment, one to mention impressively to others, a small terrapin about 10 cm long was sunbathing on a log. A white bird dismissed as another thing flying around, silently ghosting just above the long grass of the campsite became an excitement as it kept returning. So now they were announcing it to others and myself. It now had a name, Barn Owl.  They had heard the name but never seen one, so the delight of seeing it out in  the open had developed them into nature representatives rather than nature novices. 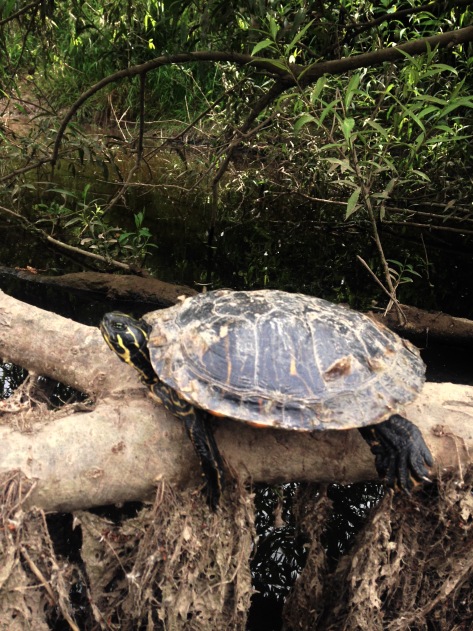 Another day another mile, but the journey was getting easier as it was not just a canoe expedition, it was a self-journey, a growing of individuals that were appreciating the meaning of the word ‘Team’ and ‘ Friendship’. What it feels like to be really really tired but still have to carry on, in the wild space so no chance of saying ” I give up”, although some tried! In adversity there is something inside that flicks on that switch, that makes the head work in a different way, gives strength to muscles you didn’t even know you had!

That’s what the Duke Of Edinburgh Award is all about and why it still means something significant to employers and to those who complete it, as they know it has taken effort, teamwork, individual perseverance and more than that participants need ‘Grit’. A quality that will provide the engine for the qualifications when the fuel for inspiration runs out.

That’s why we did the Wye, to find out if we had that quality within us and judging by the performance, they did.

The Outdoors is the Natural Place To Learn.